It is now the year 2016, and we have reached the 50th anniversary of the first airing of Star Trek.  The original Trek series (TOS) was one of my favorite shows when I was young, and I would watch it whenever I could find it airing on the TV.  By the mid-80’s it was very hard to find the reruns on the TV, but I could always go and watch the movies that were being made.  The excitement I felt when I read that a new Star Trek show was being developed was dampened a bit upon watching the first season as it aired in 1987.
It is generally agreed that season 1 of Star Trek: The Next Generation (TNG) is subpar, as the writers and actors still had to find these new character’s voices, and the influence of the old 60’s Trek show seemed like too heavy a burden to bear.  TNG ended up becoming its own thing, apart from the OG series, and it was very good.  Certain episodes reached true greatness, but the old Trek model of a crew on a ship traveling through the galaxy and exploring new worlds clashed a bit with that era’s awakening of characterization in television dramas.  Everything essentially “reset” after every episode, just like standard television shows.  This was cool in that you could watch any episode in any order and still enjoy them (a must for a show that seeks substantial syndication), but aside from the android Data, none of the characters truly changed or grew with time.  They were essentially archetypes.
In the OG series, the characters became archetypes for the fans, while the TNG characters seemed to be presented as archetypes from the beginning.  Their backgrounds were only superficially explored, their interpersonal relationships were devoid of conflict, and their motivations were far removed from us regular humans.  This was all as Gene Roddenberry wanted, for he envisioned Star Trek as an example of the idyllic, humanistic, accepting future that humanity could eventually hope to achieve.  TNG achieved this, and is deeply loved by fans, but it did so at the expense of characterization.  The crew, even one as big as the TNG Enterprise one was, sought mainly to solve problems external to themselves.  The only time personal issues were ever addressed was in light-hearted or farcical episodes, such as the ones that “explored” the relationship between Counselor Troi and her mother.  TNG was essentially like a Greek morality play.  The good guys are unbreakably good, honest, hard-working explorers, and nothing will change that.  They were paragons of virtue to be emulated and admired, but they did not reflect the humanity familiar to us humans of the 20th century.
On January 3rd, 1993 I was a student at the University of Houston and home for the winter holidays.  That day, a new Trek show aired, one that from the start was a different beast than the previous two, and one which would grow to become my all-time favorite Trek.  Deep Space Nine, a show named after its location, was still a show about exploration, but not of the boldly-going-where-no-one-has-gone-before type.  There are many ways for a being to explore the cosmos, and not everyone shares the same appeal of flying from new place to new place, getting a superficial understanding of it, and then moving right along to something new.  This may be the way for those whose thrill is to discover, but Deep Space Nine was a show about those explorers who seek not just to discover, but to understand what they are discovering.  This is a much harder and much more fulfilling end.  In order to frame this exploration, DS9 gave us the most relatable Captain yet, Benjamin Sisko, and instead of having him encounter a new friend/foe/anomaly each week, Sisko had to manage a remote outpost of the Federation, one where dozens of alien races, both from the Federation and from without, had to learn to live together, and he had to do it while raising his teenage son.
James T. Kirk (TOS) was a man devoted to his ship, his crew, and his career.  He never married (at least on the show).  He did not build a family.  He did not seek to educate.  He was first and foremost a swashbuckling leader of men.  He led by force of personality, and by the respect and admiration he engendered in his crew.  His defining trait is his enthusiasm for life.  Jean-Luc Picard (TNG) was a scholar and a diplomat, and every bit the refined European gentleman to Kirk’s farm-raised Iowan.  He too was a single man, devoted to his career, never marrying or fathering children.  He was a moral leader, one whose leadership stemmed from his vast intelligence, his ability to think critically, and the respect he held for both his crew and anyone they encountered.  His defining trait is his emphasis on order and stability, predicated on intellectual, philosophical grounds.  Both Kirk and Picard are archetypes representing the ideal of a man in the era when the shows were made.

Benjamin Sisko (DS9) stands in stark contrast to these two previous Captains.  From the first moment we meet him we learn he is a widower, his wife dying at the hands of Jean-Luc Picard when he was assimilated by the Borg and became Locutus.  He is a single father, raising his son Jake alone.  He is an African-American man, raised in Louisiana by his own widowed father.  He has known a deeper loss than anything in Kirk’s or Picard’s initial characterization.  He initially does his duty begrudgingly, for he nearly quits his commission when assigned to the remote DS9 station seen as the Federation’s boondocks.  Apart from that, he is seen by the people of Bajor, the planet nearest DS9, as The Emissary of the Prophets, a messianic figure.  This is something he initially denies and avoids, but ends up coming to grips with as he matures throughout the show.  In other words, he is a REAL MAN, not an archetype of what a man should be.
Whereas the Federation in TOS and TNG was a group of humans with a few alien races thrown in (the only alien regularly seen on TOS Enterprise was Spock), the Federation of DS9 better reflected what was supposed to be a conglomerate of wildly different worlds and races.  In this sense it was much more modern than its two older siblings.  The world of DS9 is a lot more like the world we all seem headed for than the antiseptic world of TOS and TNG.  We may all be humans, but we should all revel in our differences just as much as we appreciate all our similarities.  Cooperation, civility, and kindness are great equalizers.  These traits, along with a deep intelligence and a deep sense of empathy, allowed Capt. Sisko to manage a space station where the bar owner is a greedy Ferengi, the security chief is a shapeshifter, the security forces are Bajoran, the tailor is a Cardassian, and the great masses of the galaxy come by regularly to repair their ships, engage in commerce, or just have a little rest and relaxation.  Capt. Sisko was at home in chaos, and he provided stability for all involved. 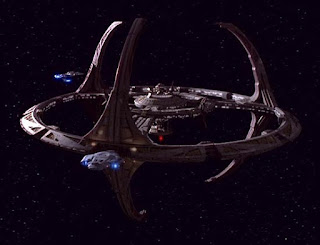 The Low End Theory of Noise